PerfectMail™ Antispam/Antivirus is a simple, accurate, and easy to use solution! FOLLOW US : 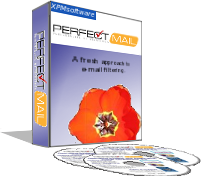 PerfectMail 3.6.0 is now available! For auto-update servers, this release will automatically be applied at some point between Monday and Wednesday of that week.

A Note on the new WhoIs Tool


This version of PerfectMail has a tool to perform WhoIs lookups using the whois and rwhois protocols. This protocols use TCP port numbers 43 and 4321 which will have to be opened on the firewall to allow the WhoIs tool to function properly.


Our focus for v3.6.0 was to increase anti-spam effectiveness. But we also added some extra Administrator Tools on the menu to make diagnosing problems a little easier. Below are the Product Improvements for this release: